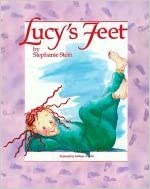 Young Lucy, eight, picks the lint from between her toes just as her mother does, but has red hair unlike anyone else in the family. Lucy is adopted, and it’s questionable as to whether she had much previous knowledge of this situation, in spite of her age. She is bothered by the thought that her younger brother “grew inside” her mother while she did not, and she expresses her anger by kicking others. Her mother assures the child that the love she felt while waiting for her grew within her heart. (Kindergarten – Grade 3)