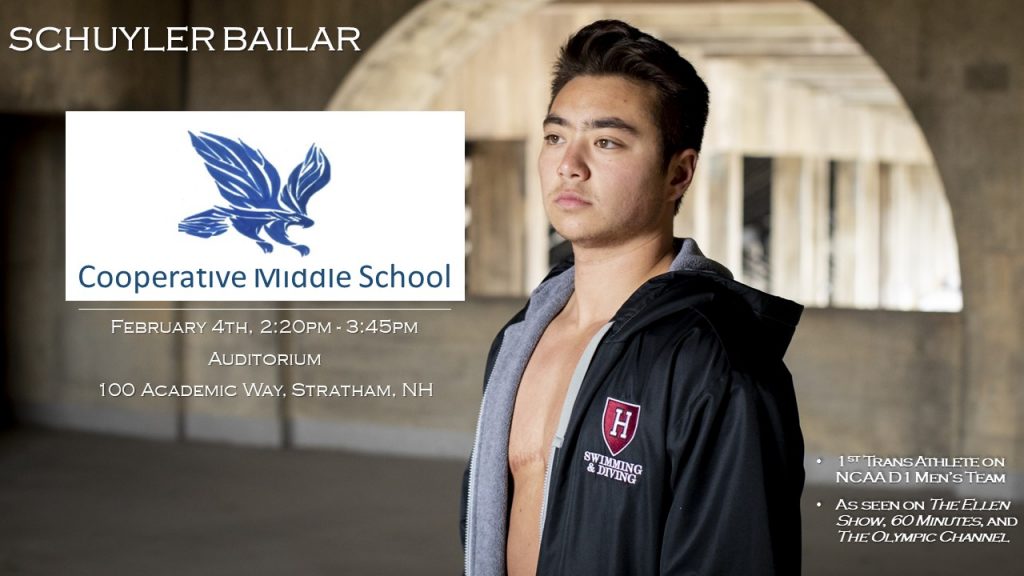 Stratham, NH - Schuyler Bailar is the first transgender athlete to compete in any sport on an NCAA Division 1 men’s team. He is also an internationally-celebrated inspirational speaker and inclusion advocate.

By 15, Schuyler was one of the nation’s top-20 15-year-old breaststrokers. At 17, he set a national age-group record. In college, he swam for Harvard University, on the winningest Harvard team in 50 years. Schuyler’s difficult choice – to transition while potentially giving up the prospect of being an NCAA Champion – was historic and timely. His story has appeared everywhere from 60 Minutes to The Ellen Show. Schuyler’s tireless advocacy of inclusion through public speaking and social media (@pinkmantaray) has earned him numerous notable honors.

Over the past three years, Schuyler has delivered over 160 talks about his experience. In September and October, he completed a six-week speaking tour (pinkmantaray.com/the-tour) of 43 speeches in 38 days in 26 cities. In addition to LGBTQ issues, his discussion includes masculinity, mental health, and eating disorders, and overcoming obstacles such as breaking his back.

Schuyler graduated from Harvard University in May 2019 with a degree in Cognitive Neuroscience and Evolutionary Psychology. He now works as a speaker and advocate full-time.

We hope you can make it!