Home » Lending Library » Diabetes » How I Feel: A Book About Diabetes 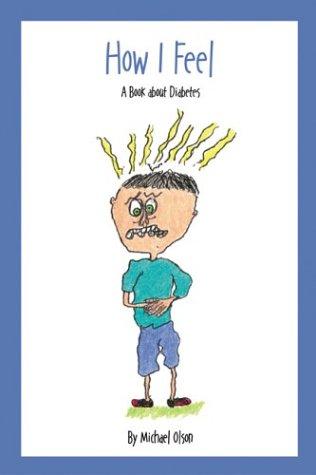 When Michael Olson’s seven-year-old brother Steven came down with juvenile diabetes, Michael and his family was shocked to find out how little information was available to help explain the disease to a child. Michael, who was in third grade at the time, resolved to learn as much as he could about the illness and to write and illustrate his own book based upon Steven’s experience. His hope was that hospitals and clinics would give the book to children and families who must suddenly face this life-long illness. How I Feel is the book both Michael and Steven wished they’d had when Steven’s first diagnosis impacted their entire family. In wonderfully evocative cartoons and illustrations that capture the frightening but ultimately hopeful journey on which Steven embarked, Michael depicts Steven’s experience. He describes what Steven went through before the disease was discovered, how he felt in hospital and during the recuperation period, and how his life changed once he became a child who would now be insulin dependent. Michael’s book not only presents a definitive understanding of juvenile diabetes in a charming, easy-to-understand way, but is an invaluable resource for those—children, parents, teachers, and doctors—who are dealing with juvenile diabetes.